Aryan's Annual Day was on friday , 5th Feb. The school told to send the kids by 4 in the evening , while they would start the function at 6.30 Pm and the function would last for 3 hours or so, after which we can collect the kids from their classes.

Now , me being me was so apprehensive. Will he dance when he will see so many people. Plus it will be dark that time , will he feel Mumma left him in school overnight. All kinds of thoughts.

So I did my part and explained him the sequence of events as much as I could. When we reached there , we realized that the front rows were already full and we were almost in the center of seating area. We came to know that parents stood in line for 2 hours to get the front rows :O

The stage was huge with lots of flashing lights. Anupam declared that he is sure, Aryan will cry. I just told him not to underestimate my son and hope for the best !

The event started at 7.00 PM. It was a designed as a dream sequence of a small kid , who had all the fairy tales running in parralel in his fantasy. And like a movie the fantasy had dance and songs in between.

Aryan's class had the second dance on the song, 10 on 10 (Priyanka Chopra's song from Pyar impossible). The situation was when Snowhite's mother asked mirror , who is the prettiest of all and the mirror named her ! Apt for the situation , I must say !


So HE DID NOT CRY !! Actually none of the kids cried. They all moved...err..danced :) And they all did it pretty well. Considering it was their first encounter with stage , considering that it was dark , considering that they would not have seen such grand flashing lights before , they did it REALLY well.


It was tough to spot him actually. I saw him on the closeup on side screen twice. Anupam could not see at all , but later realized that he actually clicked him , when we saw the 2 photographs that we clicked after the function:) Others who sat in front row, told that initially when the lights came on him , he was dancing with his eyes(head turned up) on the roof :) Later he was dancing normal :)


The event lasted till 9.45 pm and the kids were waiting in their classes with teachers. All the parents were worried that the kids might have slept , might be crying and cranky etc etc. But we found them all happy and bubbling. And when I asked him , did he enjoy , I got a BIG YES as the answer :-)

Camera was not allowed officially but we carried (like everyone else) and clicked only 2 pictures :) 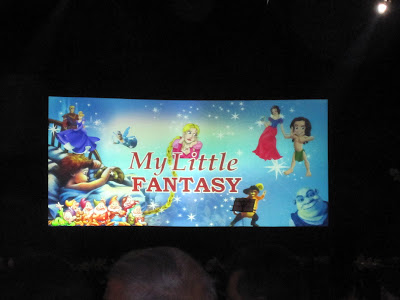 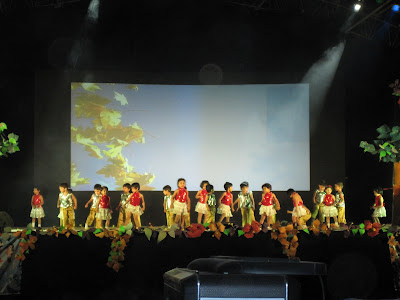 3rd boy (in pair) from the left, if leave the girl in solo


And the song , for those who have not heard it :