..not India's ..Aryan's. Yes ..15th August 2012 marks independence for my little guy. From that day Aryan started sleeping all alone in his room on his bunk bed. Its been more than 10 days and is going smooth ...mostly.

Ofcourse we have some rules.

Mumma has to lie down next to him and together we do some reading and when Aryan is almost sleepy  , Mumma can move out of his bed after giving him a good night pucha.

Papa's mobile should be kept near him , so that he can dial mumma's number if he is scared at midnight or need something.

Room lights should be left on. To this one , ofcourse we will soon convince him to switch to night light rather than the room lights , but I am fine with this to start with.

As of now he will sleep on the lower bed during night and top bed during day and once khushi moves to his room , he will occupy the top bed at night too. This rule is mumma's idea , for 2 reasons , Mumma is not confident of letting him sleep on top for now and plus its easier for mumma to cuddle with him on lower bed.

If at all he feels scared , Mumma should come to him immediately and sleep with him.

So far though , he has called a 1-2 times and after some cuddling allowed mumma to go back to her room.

On some days he wakes up early , before mumma and papa , mostly because papa's mobile has an alarm. And on those days he would want mumma to come to him and do some cuddling , which mumma enjoys as much.

So its been going good. Just that the Mumma still wakes up at midnight and walk to his room, to adjust his blanket , to kiss him sometimes and to do similiar stuff. Hopefully soon she will also be relaxed enough. 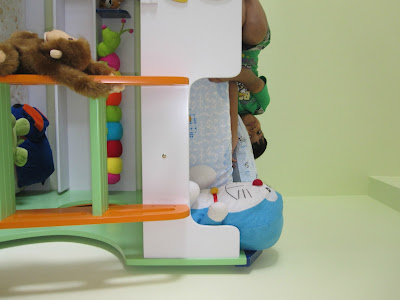 Showing off his new bed.

And yes ..here are some pics of the KUNGU FU kid ! 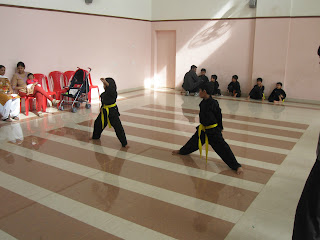 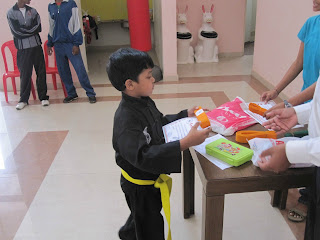