Passionate about Socks and Shoes ! 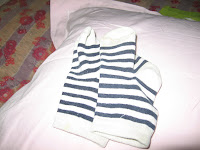 It was a long pending post and I almost forgot about this. Aryan is very passionate about his footwear. This includes socks and shoes.

I have mentioned several times that Aryan was crazy about a black and white striped socks and would find them from any where and insist on wearing them even if they are wet or dirty. This continued till I threw them in dustbin as they were too small for him to wear. Those socks did embarras me a few times when Aryan wore them to near by supermarkets or in front of guests.People would have thought , can they not even buy a proper size socks for the baby.

Next comes the shoes! Aryan had 3 pair of shoes until recently. One were the black whistling shoes that used to make noise when he walks. The other one were blue canvas casuals and the third one were a pair of formal shoes. Of the three the blue canvas one are his favourite. The whistling shoes were worn based on his wish. I mean he used to decide which shoes to wear when. And when you want to make him wear the formal ones ..HIDE the others. 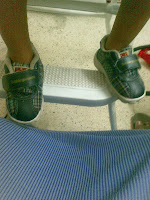 Now that the whistling shoes do not fit him , I had to permanently hide them. The blue canvas ones are still a problem , since they will be small for him shortly.

I bought a colourful sandals for him recently , which he DID NOT LIKE AT ALL and REFUSED to try.

And so went hunting shoes for him this thursday. As it is I could not find any good options. And whatever I found, Aryan did not LIKE. HE REFUSED TO WEAR ANY NEW PAIR OF SHOES.

Then we reached a BATA shop and Aryan spots another pair of same blue canvas shoes and he is ready to wear them.

I did not want to buy same color same design and so we did not.God knows when will our guy like another pair of shoes , else he will be SHOE LESS once he out grows this one and I will have to throw them as well.