School Story - as it goes!

Aryan is all prepared and ready for school. Doesnot know whats in store foe him. He is just excited about his new bag , tiffin and travelling in bus. I explain to him that bus will start only after 4 days , but in vain. We reach school and we were told that they will hold the kids for 1 hour and we have to wait outside and we can take them along after an hour. It was a surprise for us , we were initially told that they would allow us in class for 2 days and I told the same to Aryan. He cried like hell when when the teacher picked him up to take him inside. He has had no breakfast and he did not eat the snacks I packed also.

When we went to pick him in class after an hour he was having a balloon in his hands and was crying in a slow steady pitch. The teacher told he was okay , stop crying when we talk to him and again starts after sometime.

Later in the evening he told that he played with a yellow balloon in school.

I fed him breakfast in car , he never has it at home , he is too excited to leave the house after we are ready :-P He goes fine till the school ,inside the school he sees a kid crying and starts rubbing his cheeks , trying to control his tears,(so sweet and cute) but they finally roll down and he cries as they take him inside. After an hour he comes out with his class in a queue. No smiles no tears.

Later during the day he told me that he had his banana and he played "clap slow clap fast" (dont ask me more about this) and with a balloon.

Mondays are always bad.He cried badly as soon as I put him down. He clinged to my legs and I had to put a stone on my heart and rush back. After 2 hours when we picked him he was his usual self.

He waved a bye without a smile and without looking into our eyes. Was usual when we picked him.

They restricted the parents ouside the gate and took the kids inside from the gate. He cried as soon as he started walking in. His eyes searched for us while he walked in the premises.

Afternoon , he had to come back in bus. We went to school and were hiding to see how things proceed. He was crying badly as they take the kids to buses in queue. I could not stand his crying and scared look on his face and went and pacified. I was allowed in the bus on day 1 , though I thought I would see from distance only. But after he saw me I had to board the bus. I showed him his friends in the bus from the same day care. Made him friends with the maid. Told him how he should be sitting in the bus etc. He was happy and naughty in the bus. But cried again when I left him in day care.

Morning was usual, little crying while walking in. Afternoon was better. He came in queue , was crying very little before he boarded the bus. He was fine once e found his friends in the bus. And nicely went to day care later , while we saw everything from distance.

Morning crying has not ended still. Afternoon was perfect. 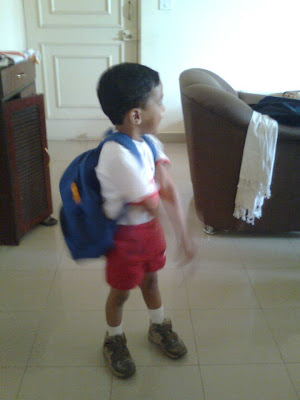 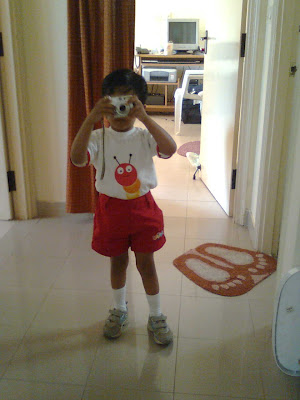 P.S : Pictures from mobile , since camera is to be used by the prince himself.
scrapped by Swati