I know I have been lazy with this one but better late than never. Here are the details on how we celebrated his birthday :

Celebration at school : They just allow us to send simple (non-icing) plain cake for the kids. And so we did the same. The cake would have been cut and distributed in class. Here is the update I get from him : "School mein bread (cake without icing = BREAD) kata, P Maam bread kata.Aryan Happy Birthday to you kiya, M (a girl in class) ne ulta clap kiya(followed by demo) , S ( a boy in class) ne aaise (followed by demo) clap kiya."

Celebration at day care : We reached there around 5 pm with cake and birthday caps. Prince Charming was all excited to see us , felt shy to be the centre of attraction. The kids patiently waited for cake to be arranged. The cake was cut , served and sweets distributed and we came home.

Celebration at home : Aryan's dadi instructed on phone to make poori and kheer for Aryan on his birthday and so it was done. Aryan was too happy after all the attention , happily had all the yummy food without a fuss.

Party on weekend : On 25th we planned a kiddy kinds birthday party with Aryan's cousins and his close friends from daycare. The theme was thought to be pooh for Aryan LOVES Pooh. Party was in the apartment's function hall. It was tough to explain Aryan that we were preparing for HIS birthday party , since it was actually first party we organized. He thought we are getting ready for X or Y's birthday party.Finally we reached the hall with the stuff , did some basic decoration. Aryan swamped the cake and licked his fingers a little as he was way too excited to see a BIG POOH cake. Guests arrived. And finally our son started believing that it was all for him. He played like mad and was sweating before the cake was cut :D

Like I told it was the first party that I organized and so my inexperience did show at so many places like I forgot to make popcorns , distribute caps , open party popper , burst the centre balloon etc etc. Thankfully the kids were prompt to ask and collect their return gifts :D

In all ,inspite of all my forgetfullness the party was enjoyable atleast to the kids :)

When I asked Aryan later , "Maza aaya" the reply was , "Yes , gym (the party hall has gym next to it :P) mein bahut maza aaya"

For the records , on the menu was :
A pooh Cake , Samosas , Sandwiches ,Pizza , Ice cream , Soft drinks , Cookies & Chips AND OFCOURSE POPCORNS THAT WERE NEVER SERVED :P

And below is my naive attempt to design his birthday invite : 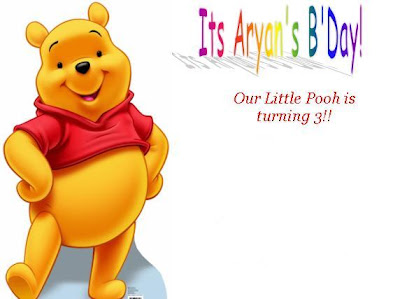 I do not have many blogworthy pics (I forgot to click :P), but regular readers can mail me if you wish to see. 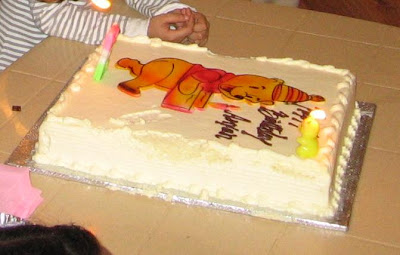