Aryan's Nanu - Nani (my parents) came for a 15 days vacation , day before yesterday. And Aryan is already having fun with them.Yesterday was their first day with us and I was also home.Aryan was little clingy to me , coz he was missing his dadi , who went back for a few days but still he was having fun, since he could see me around.So here are a few incidents.

In the morning, Nanu sang Hare Rama , Hare Krishna to him and used is hands as 'Cheemta majeera' , an intrument used while saying bhajans.So , it was like clapping by one hand and Aryan was pretty excited seeing that and tried to immitate.It was so funny to see him doing that.

Next his Nanu taught him to snap fingers(Chutki bajana ..as they call it in hindi) and aryan was so excited seeing that.He literally attempted that using his index finger and thumb.

Afternoon , was ROARING session.Aryan makes a roaring sound and when he was doing it my papa immitated. And then started the jugal bandi(duos).Both of them tried to make it as loud as possible and they took turns.It was so funny , how aryan would wait for papa to repeat.

Papa-Mummy bought him a small dholak from a fete in our home town.Its not as good as the real ones , basically its just a toy.So in the evening, Aryan was getting cranky when I gave him the dholak to play and he grasped it in his lap , basically not like a dholak , but more like a tabla or a bongo.And banged on to it. 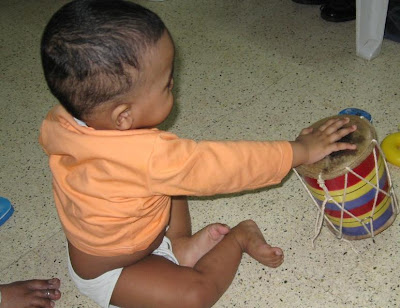 He did it for quite sometime and enjoyed a lot. And then started another jugal bandi session. Papa took the dholak from him and blew that. And after two minutes Aryan snatches it back and played.And after banging 2-3 times , he rolls it to his Nanu. And again snatches after 2 minutes.I will sure update the video, as soon as possible. 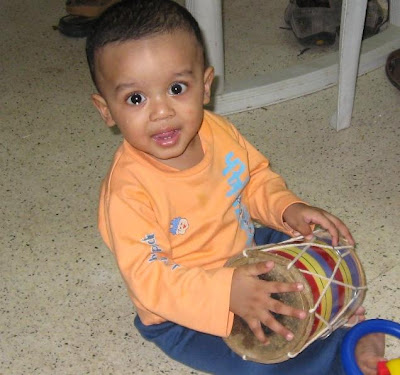 Late evening , we were all having tea and some snacks , when Aryan banged into the plate and whole of namkeen was on bed. And when I asked Aryan .."Yeh kya kiya", I was scolded by my parents , that what else you expect him to do and who will do all this , if he won't. So I kept shut. Later , mummy was looking at the mess and cleaning and said , "Ohh..yahan kaise soyenge". Then I told her , "Now why do you say so..that time you scolded me." So the reply comes.."Bache aaise hi karti hai , Mummy ka kaam hota hai bedsheet badal de". Uff..yeh grand parents ..:P
scrapped by Swati